In my Quest to create something that ‘feels’ intelligent I’m drawing inspiration from multiple sources.

One cool way to ‘peak into the future’ of artificial intelligence is to compare different ways AI has been portrayed in the media. To me it’s a way to prototype machine intelligence and it’s possible impact on human life.

This cute movie goes to show how much expression can be shown without using a screen. Interestingly it’s the robot that humanizes the humans – a very recurrent theme in robot-movies. 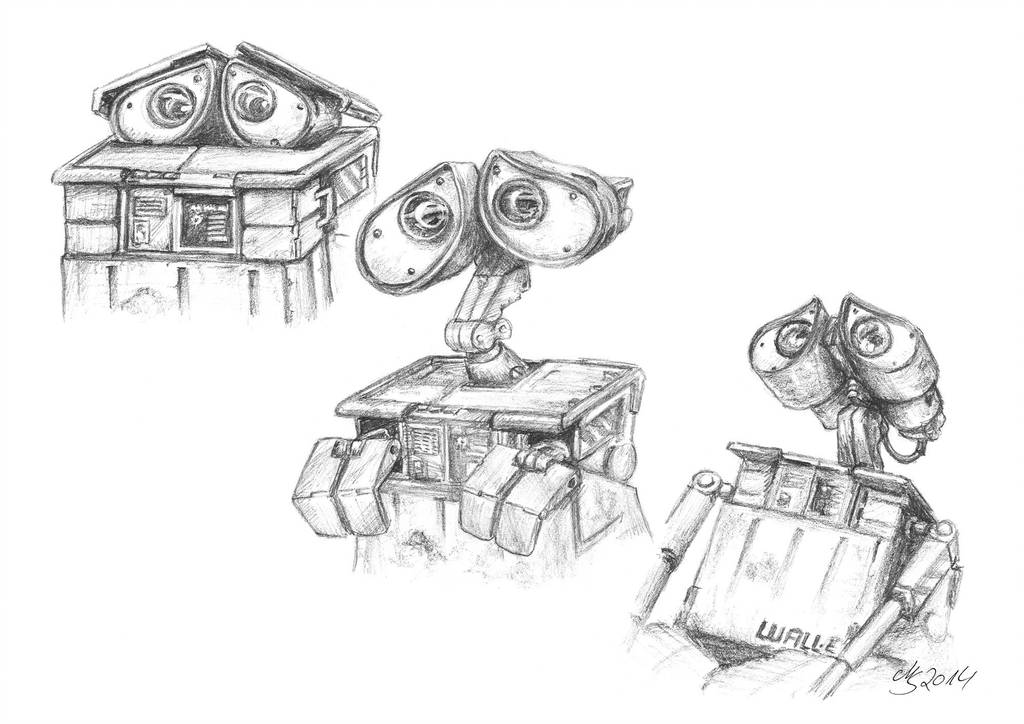 A major reason why WALL•E is so endearing, is his amazing expressiveness. He uses just his body and ‘eyes’ for this, although Pixar cheats a bit with how ‘stretchy’ all of the metal is :) (source)

To me WALL•E feels intelligent because he exceeds his programming and doing his own thing. In the excellent first 30 minutes of the movie (near perfection) instead of ‘just collecting waste’ WALL•E is inquisitive and investigates the world around him. Another way his intelligence feels similar to our own are his emotions: looking longingly at movies and being happy and proud of his trophies. He cares for others: he shows empathy (for his buddy-cockroach and EVE).

Another reason we care for WALL•E is also that he is very vulnerable. He makes mistakes and he can be physically/mentally damaged. Not a big box-office success, but I liked this movie :)

A short recap: a robot (Chappie) is stolen from the company that created him and falls in the hands of South-African criminals. At the start Chappie is very fragile and doesn’t know much about the world. His ‘parents’ quickly raise him to do robberies, but slowly he learns the difference between right and wrong.

The criminals raise him like a child, his actions and body-language show him progressing from ‘baby’ to young adult. More than any human in the movie, Chappie changes and grows mentally and emotionally.

‘Chappie’ is one of the few movies about a learning machine. This capacity to learn grounded his intelligence. The movie weighs in on the nature/nurture debate. It makes you think about the ethical responsibilities of the parents growing up in a criminal home. If you think of his ‘criminal education’ as programming, clearly the ‘parents’ are to blame. But if the robot learns this behavior and has a consciousness then perhaps it also carries responsibility, just like humans.

Can we hold Chappie responsible for his actions? Should he go to prison, or be dismantled as a buggy machine?

We humans magically become responsible adults at the age of 18, when would that be in artificial intelligences?

Like in WALL•E, Chappie shows emotion, vulnerability and empathy. His emotional and mental growth throughout the movie makes him even more intelligent than WALL•E to me.

If you see these movies as a way of prototyping machine intelligence you get a look into the future of how the impact AI could have on people. My main take-aways for creating an experience that feels ‘intelligent’ are: make it show emotion, be vulnerable, have a capacity for learning and have the machine intelligence show empathy.

images in this post are not under the Creative Commons license