If the answer is UX designer, what was the question?

This article was first published on Medium

I work in the field of digital design, and man — do we have the most confusing names for ourselves! So join me on my journey to find out what a UX/UI designer does and how that’s different from what digital product designers do. I discuss with fellow designers and even run a survey on digital design in the Netherlands with 80 participants!

A couple of months ago my wife wanted to post a vacancy for her company. They were looking for someone to enhance their design system and to create new screens based off of wireframes and mockups. The job-description was quickly made and my wife decided to go with ‘UI/UX designer’ for the title. Somehow that got things going in my head: “I don’t think that’s the right job-title”, but what would be correct? Visual designer? Visual Experience designer? UI designer? Just UX-designer? I discussed this with a lot of people (shout-out to my friend Glenn!) and I even did a survey with over 80 participants to find out The Truth. 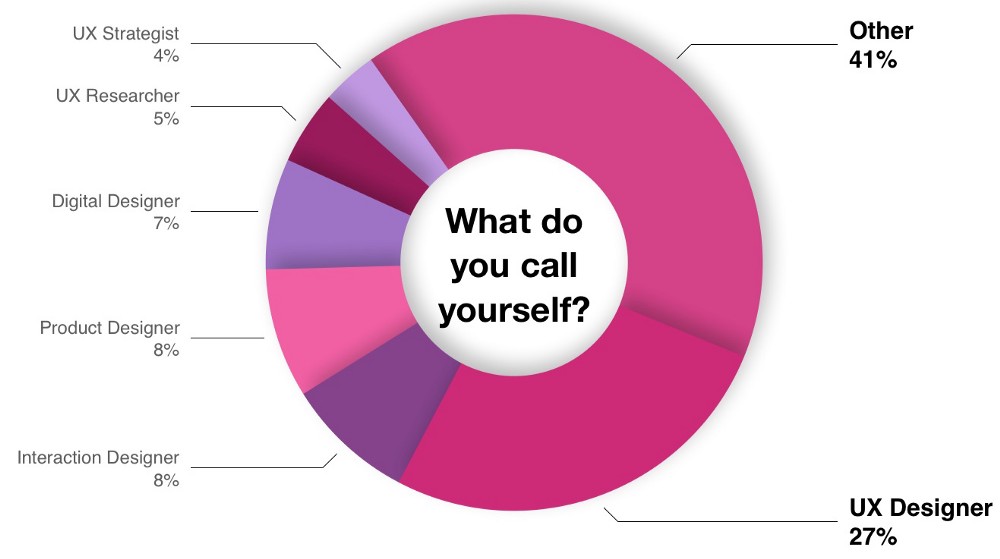 Wow, only a quarter of people in digital design identify as UX Designer! (in the Netherlands, based on a survey with 80 people)

Before we continue, I have to get something off my chest. I hate titles, especially job-titles: they are so fluffy and meaningless. Still we attach so much value to a name, title or label. Why?

What’s the first thing you ask when you meet a new person? Their name. What’s the second thing? Their profession.

What do we know about Jack because of that? Is he a nice guy? Can I trust him to do good user tests? Will he help me with my design system? Does Jack know anything about iOS design? Does he run workshops? We don’t know anything about Jack from that sentence, but we make assumptions (“a UX-designer, eh? So you’re good with colours?”, “can you design my business card?”, “give me an icon!”, “you must be so creative”). These assumptions are different from person to person. Poor Jack probably didn’t mean for you to think of him as an ‘icon-giver’ when he said he was UX designer. What good is a label when you can only infer some limited amount of info from it?

What’s worse: when someone doesn’t fit our mental model, we figure he is probably not a good example for this label. If Jack doesn’t do user testing, we think he’s a bad UX-designer. He may call himself UX designer, but he’s not a real UX-designer. Just let that sink in: how terrible is that?

The opposite is true as well. When you meet an exception (an interaction designer who’s doing a darn good job in visual design), you reinforce your previous model (“wow, usually you people are not that good at …”).

It’s called the true-scotsman fallacy and once you know it, you’ll see it everywhere. Politicians love it 😉

Long story short: I don’t have a function-title on my LinkedIn or my website. But I can’t get away with it everywhere :)

…but we need job-titles, so let’s just get on with it

What does a UX designer do? How’s that different from a UI designer, Interaction designer or Product Designer? And what about those human-experience strategists?

The screenshot below is from a google search on “difference ux design” and yes, these are all different posters explaining the differences between UX/UI/Service/Product/etc-design… That’s not a good sign!

A quick google search for “difference ux design vs”

“Big deal”, you might think. “I don’t care that terminology in design is vague. Let’s make some more posters, or come up with even more job titles.”

But it has serious consequences:

We are shooting ourselves in the foot with our terminology when it leads to difficulties in connecting vacancies to the right people!

What does that mean for you?

Discussing terminology is fun, but it’s also a pointless endeavour. At the end you’re right back where you started (you’re just a little more tired).

So the main tip is: Don’t assume! Dig deeper when somebody says they’re a UX-designer or product designer. What do they really mean with that, what are their tasks and what do they like to do? Also, what do they not do?

The same holds for all jobtitles…

But wait, now I still don’t know what a UX-designer does?

That’s true! I’ve sketched the problem, but provided no solutions. Highly unfair! In my next post I’ll discuss the results from my survey. Which skills fit with which job-title? Are there any interesting clusters?

I’ve done a brief analysis of the results already (ux-designers vs others), there are some patterns. Also, people identifying as UX designer seem to be slightly less humble than others in design 😇

If you need some wire framing, sketching, prototyping and user testing: ux-designers are your pick!

See you next time, where I will dive into my results more in-depth!

Oh and my wife? She hired a kick-ass designer after changing the job title to UI-designer ;)

Special thanks to Glenn Veugen and Azadeh Shirzad for proofreading and helping me promote my survey.